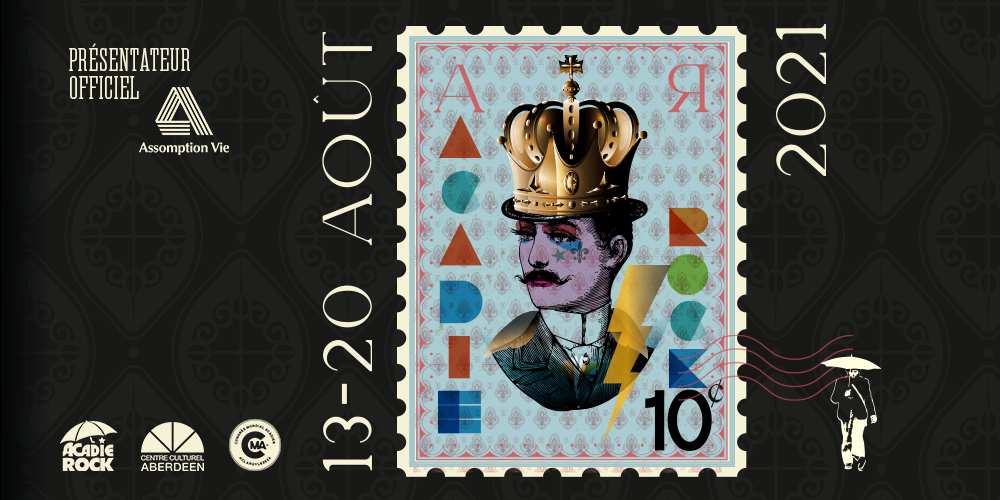 Moncton, NB, Thursday, July 15, 2021 – The Acadie Rock festival, produced by the Aberdeen Cultural Centre in partnership with the City of Moncton, and presented by Assumption Life, announced the schedule of events for its 10th annual festival, which will take place August 13 to 20, 2021. To celebrate this anniversary edition, as well as the return of in-person events, about 30 events incorporating music, poetry, visual arts, dance, theatre, and film are being offered, with artists from across the region highlighting once again a modern and plural Acadie.

Musical performances will be back in full force this year, showcasing many festival favourites. Les Hôtesses d’Hilaire, Maggie Savoie, Christine Melanson, Les Improbables, P’tit Belliveau, Joey Robin Haché, and Le Coude will take to the stage alongside emerging artists such as Jonathan Sonier, Sluice, Baie, Kelsey Albert, and Écarlate, winner of the 2021 Gala de la chanson de Caraquet. Kelsey Albert and Écarlate will perform with singer-songwriter Daniel Léger as part of Musi’cook, a summer event organized by the village of Memramcook.

On the heels of the successful televised show Acadie Road: un road trip musical et poétique that celebrated National Acadian Day in 2020, the team is thrilled to announce a new show titled La Fête de l’Acadie: Tableau de backyard, inspired by a poetry collection by Guy Arsenault and written by Céleste Godin. Co-produced with the Congrès mondial acadien 2024 team, directed by Kevin McIntyre, and broadcast on Radio-Canada, the show will feature more than 60 artists, including Lisa LeBlanc, the famous group 1755, les soeurs Richard, and many others in New Brunswick, Nova Scotia, Prince Edward Island, Newfoundland, and Louisiana.

The show, which headlines the program of events, concludes a day of special events to celebrate the August 15 holiday. Celebrations will begin with a tintamarre, the route of which will be announced publicly in the coming weeks. Live performances will follow in Sommet Park, featuring the Québécois dance company Zeugma, musicians Menoncle Jason and Spoutnique, and Acadian drag queens Barb Wire, Sami Landri, and Rose Beef. A performance by the acclaimed Les Hay Babies will close out the live events.

New this year, the Menu de Backyard is a throwback to Guy Arsenault’s poetry and to his references to food in 70s Moncton. Bois de Popsicle [popsicle stick], Jardin de Peppermint [peppermint garden], Rhubarbe Volée [stolen rhubarb] are but some of the flavours that will find their way onto menus of local establishments to awaken festivalgoers’ tastebuds and feelings of nostalgia. Throughout the festival, participants will be able to explore Moncton through the lens of the famous poetry collection at various participating locations.

A multidisciplinary event, the festival is a great opportunity for many partners to present summer events. The Frye Festival is presenting KidsFest for children ages 2 to 10 and crowd favourite Frye Jam, featuring the best poets of the region accompanied by the jazz band Les Païens. The Fédération des jeunes francophones du Nouveau-Brunswick is presenting the finale of Accros de la chanson, as well as a tour prepared by the Musée acadien de l’Université de Moncton retracing the FJFNB’s 50 years of existence.

As for theatre and film, Satellite Théâtre is offering three performances of Pépins, un parcours de petites détresses at Belliveau Orchard in Memramcook. The play, loved by all those who got to see the only performance in 2020 due to the pandemic, features actors Bianca Richard, Caroline Bélisle, Florence Brunet, and Katrine Noël. With Moncton Monologues, the Capitol Theatre Academy invites families to go back in time to the 1920s to meet colourful characters from the region. Finally, FICFA is presenting a world premiere directed by artist and filmmaker Angie Richard as part of l’Acadie suit son COURT.

Éric Cormier, Director of Acadie Rock, reminds us that finding ways to adapt is a collective effort: “Creative industries continue to reinvent themselves, and the festival is proud to bring together again this year various partners who have also been affected by the public health situation of 2021 to present events jointly.”

Sébastien Dupuis, CEO of Assumption Life, reinforces the importance of support: “At Assumption Life, we know that our Acadian identity is linked in part to get-togethers and that, due to the COVID-19 pandemic, we all feel the need to be together again. As a leader in community engagement, we are proud to be a presenting partner of this 10th annual Acadie Rock festival, which will offer varied and multidisciplinary programming while shining a light on local Acadian talent. Assumption Life takes pleasure in making a difference and supporting Francophone and Acadian artists.”

The complete schedule of events is available at acadierock.ca. Reservations for various concerts will open once health measures and venue capacities are confirmed for the month of August. Festival Acadie Rock is made possible thanks to the contribution of the Government of Canada, its presenting partner Assumption Life, and many valued partners.