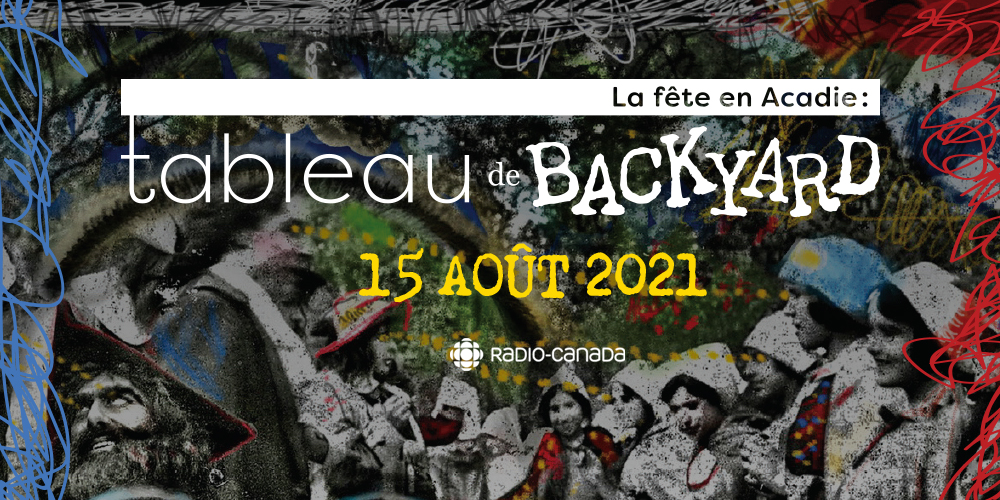 Moncton, NB, Thursday, July 15, 2021 – Organizers of the Acadie Rock festival and the 2024 Congrès mondial acadien (World Acadian Congress) are pleased to announce that a new televised production, titled La fête en Acadie: Tableau de backyard, will bring together viewers from across Canada on August 15 to celebrate National Acadian Day. The show will be broadcast on ICI Radio-Canada.

The 2021 show follows on the heels of Acadie Road: un road trip musical et poétique, which successfully celebrated National Acadian Day in 2020 despite the pandemic and was recently announced as a finalist for two Gémeaux 2021 awards. The Acadie Rock team, in collaboration with the 2024 Congrès mondial acadien organizing committee, opted to hit the road again this year, travelling throughout Acadian territory to meet with artists in their communities. Making the most of learnings from last year’s virtual production, and to respect health measures in place due to the ongoing pandemic, organizers are pleased to present a hybrid show to commemorate the 10th anniversary of Acadie Rock. Partly pre-recorded, the show will be broadcast across the country.

Kevin McIntyre is once again producing the show, while writer Céleste Godin is finding inspiration in the poetry collection Tableau de backyard, by Guy Arsenault, to create the storyline. Filming is currently taking place in various locations in Nova Scotia, New Brunswick, Louisiana, Prince Edward Island, and Newfoundland. Joining this year’s production team are Daniel LeBlanc and Arthur Comeau, both from the Baie Sainte-Marie region of southwestern Nova Scotia, where most of the filming is taking place. This is also the region where the Congrès mondial acadien will be held in 2024, namely in the municipalities of Clare and Argyle.

“Again this year, Radio-Canada is happy to broadcast the show celebrating National Acadian Day both on Acadian soil and across the country. The Aberdeen Cultural Centre and Festival Acadie Rock rose yet again to the challenge to deliver a show filled with emotion and that showcases the impressive talent found in our corner of the world,” states Jean-François Cochet, Regional Director of Radio-Canada Acadie.

Éric Cormier, Director of Acadie Rock, is thrilled to see how the event has evolved over the years, even finding a way to make the most of the context of 2020: “Festival Acadie Rock is proud to have developed this partnership with the 2024 Congrès mondial acadien to produce a second major show for the August 15th holiday, during a pandemic. This partnership allows us to explore new horizons and bring a different flavour to the televised show.”

Vaughne Madden, Executive Director of the 2024 Congrès mondial acadien, is also proud of this partnership: “Acadie Rock set a high standard for itself in its first years through artistic choices, quality programming, and by shining a light on a plural, modern Acadie. Since our goals are similar to those of Acadie Rock, this partnership is a wonderful opportunity to promote our way of celebrating Acadie.”

The show La Fête en Acadie: Tableau de backyard will headline the 10th edition of Festival Acadie Rock, which will take place from August 13 to 20, 2021 in Greater Moncton. It will be broadcast at 9 p.m. (9:30 p.m. in Newfoundland) regionally on ICI Télé and on ICI Acadie’s Facebook page, as well as on ICI ARTV. The rest of the country will be able to watch it from 11 p.m. Atlantic on ICI Télé, or on ICI TOU.TV from August 16.

The complete schedule of events of Acadie Rock is available at acadierock.ca. This initiative is made possible thanks to the financial support of the Government of Canada through its Celebrate Canada program.